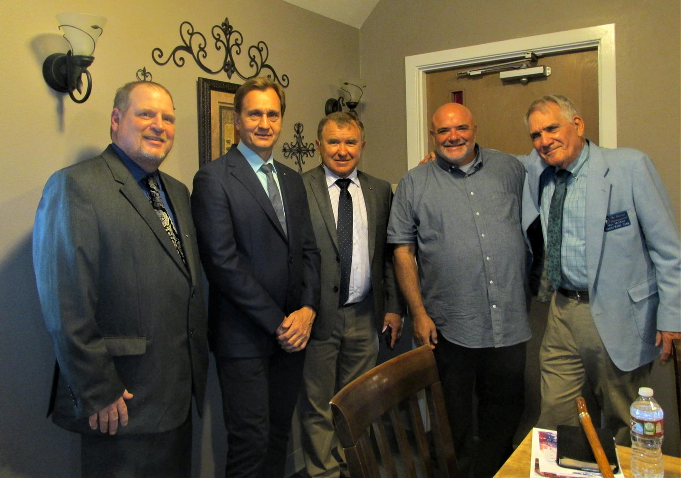 Victor Nagornor, second from the right, Assistant National Director for Gideons in Russia

(spoke through an interpreter)

Gideon Theme: Isaiah 55:11 So shall my word be that goeth forth out of my mouth: it shall not return unto me void, but it shall accomplish that which I please, and it shall prosper in the thing whereto I sent it.

Testimony:  Victor Nagornor was brought up in a family where the word God was never used because Russia is a communist country.  He joined the military as a young man and lived a sinful lifestyle. He began to search for the meaning of life and looked for a Bible.  Bibles were hard to find but he finally located one of the book of Matthew.  He began to read and study it.

One night he had a dream.  He was a young child and the window of his room was open and a gentle wind began to blow over him.  When he woke up, he felt a peace that he had not known before and knew without a doubt that God did exist. From his reading of the book of Matthew, he realized that the wind was the Holy Spirit and that he received salvation by a childlike faith. It took him more than two years to found a local church to attend.

Gideon Ministry: Gideons International was established in 1899.  Members of The Gideons International personally witness and distribute God’s Word to police, fire, and medical personnel; prisoners; military personnel; students in the fifth grade and above; and to those with whom they interact on a daily basis. Scriptures are also placed by Gideons and Auxiliary in key locations, including hotels, motels, hospitals, convalescent homes, medical offices, domestic violence shelters, prisons, and jails.

Victor shared a video showing the Gideon Ministry in Russia.  They distribute Bibles to students at the University of Moscow with the goal of planting the seed of the Word of God in these young lives.

Victor said that we may have different cultures but because we belong to God’s family we are one in Christ. All glory to God!  He asked that we pray for the Gideon Ministry around the world and for the work in Russia as workers are needed.

For more information about the Gideons Ministry, go to https://www.gideons.org/about

Donations are always welcomed. You may also contact Mac and Carolyn McMinn from Waller Baptist who lead the Gideon Ministry in this area. 832-674-3903

Two Questions to AskLive Your Faith
Scroll to top